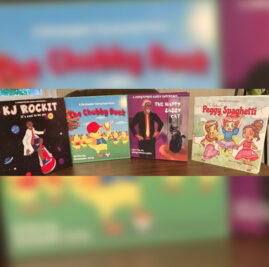 You might remember Carey, a single dad who participated in our Hope Gardens program with his two young children 10 years ago. During his stay at Inter-Faith, he wrote a story for his children about a day in the life of a single father and his little girl, who loves spaghetti. Using the pen name Christopher Carey, he published “The Adventures of Peggy Spaghetti” in 2016 and a sequel, “Friends to the End,” in 2019.

“The Chubby Duck” introduces Frank Featherfeet, a happy little duckling who is always looking on the bright side of things. The hardest thing for Frank is making friends. When the other ducklings won’t let Frank join their kickball game, how will he learn that he is just as good as everyone else?

“The Happy Sassy Cat,” inspired by Carey’s son and daughter, is the story of a cat who realizes that her behavior can be painful. Will she change for the better?

“KJ Rockit: It’s Cool To Be You” tells about a boy’s brave journey to realize that it’s cool to be yourself, no matter what others say or do.

Carey is passionate about creating fun, vibrant stories that share valuable moral lessons to empower kids of all backgrounds. His inspiration for the new books comes from his experiences as a single father and his observations about bullying, learning to accept yourself, and treating others as equals because it’s the right thing to do.

Learn more and buy the books at ChristopherCarey.com, and keep up to date with Carey on his Facebook, Instagram, and other social media sites @christophercareystories.