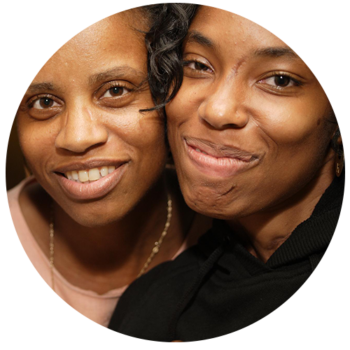 Angela and her teenage daughter entered Hope Gardens, Inter-Faith’s transitional housing program, in the fall of 2017. Angela had lost her job, and she wasn’t able to find another quickly. In the meantime, her landlord started eviction proceedings. Angela’s family lived close to Hope Gardens, and when she found out she would lose her home, she got in touch with us.

While in the program, Angela obtained full-time employment as a home health aide. On the side, she cleaned houses and did hair. She saved more than $1,000; she kept up with her bills, paid her rent on time, and improved her credit score. She walked to work 7 days a week to save money on transportation.

She also had to contend with some of life’s most difficult situations in her time at Hope Gardens. She lost her sister and completed mental health treatment. But she was determined to keep moving ahead. And in the fall of 2019, Angela graduated from Hope Gardens and is now living with her family in an apartment independently.

Angela speaks often about how grateful she is to have found Inter-Faith. She never lost sight of her motivation: to improve her daughter’s future. She comments that she doesn’t know where she would be without the support she received. She has improved not only as a mother, she says, but also as a person: “I appreciate the ‘good push’,” she says.

Back to Main Page